Powers of Liber 231 and the Tarot

Liber 231 – secret powers of the Tarot

We all need energy. Energy enables us to do things in our life. With energy we are sharper, clearer, optimistic, dynamic, inspirational, and so many other things. Energy is even more important when it comes to magic, but this is an area that has not been addressed, until now.

While I was writing The Tarot and the Magus,  the Spirits of Liber  231, a document of mysterious origins by Aleister Crowley. The fact  that these Spirits turned up without any kind of invocation and evocation  on my part (the book was supposed to be for beginners!) – proved a turning  point. These Spirits were ignored simply because nobody knew their  origins, but at their insistence, I started researching Crowley’s writings.  Eventually, many secrets were revealed – see my book, The Tarot and the Magus.  A few days after the Spirits of Liber 231 revealed themselves to me, the  Goetic Spirits also turned up, saying they were ‘cousins’, and did not  want to be left out!

The Spirits of Liber 231 are the secret powers behind the Major Arcana of the Tarot. Previously these spirits could only be contacted after much time and effort using ritual magick (see Kenneth Grant’s Nightside of Eden and Linda Falorio’s Shadow Tarot). Now, they are all available to the user in safe controlled conditions. The powers of the Major Arcana found in Liber 777 are listed after each verse.

A, the heart of IAO, dwelleth in ecstasy in the secret place of the thunders.
Between Asar and Asi he abideth in joy.

The lightnings increased and the Lord Tahuti stood forth. The Voice came from the Silence. Then the One ran and returned.

Now hath Nuit veiled herself, that she may open the gate of her sister.

The Virgin of God is enthroned upon an oystershell; she is like a pearl, and seeketh Seventy to her Four. In her heart is Hadit the invisible glory.

Now Riseth Ra-Hoor-Khuit, and dominion is established in the Star of the Flame.

Also is the Star of the Flame exalted, bringing benediction to the universe.

Here then beneath the winged Eros is youth, delighting in the one and the other. He is Asar between Asi and Nephthi; he cometh forth from the veil.

He rideth upon the chariot of eternity; the white and the black are harnessed to his car. Therefore he reflecteth the Fool, and the sevenfold veil is
revealed.

Also came forth mother Earth with her lion, even Sekhet, the lady of Asi.

Also the Priest veiled himself, lest his glory be profaned, lest his word be lost in the multitude.

Now then the Father of all issued as a mighty wheel; the Sphinx, and the dog-headed god, and Typhon, were bound to his circumference.

Fortune: Power of acquiring Political and other Ascendency.  Change of fortune

Also the lady Maat with her feather and her sword abode to judge the righteous.
For Fate was already established.

Then the holy one appeared in the great water of the North; as a golden dawn did he appear, bringing benediction to the fallen universe.

Also Asar was hidden in Ammenti; and the Lords of Time swept over him with the sickle of death.

And a mighty angel appeared as a woman, pouring vials of woe upon the flames, lighting the pure stream with her brand of cursing. And the iniquity was very great.

Then the Lord Khem arose, He who is holy among the highest, and set up
his crowned staff for to redeem the universe.

He smote the towers of wailing; he brake them in pieces in the fire of
his anger, so that he alone did escape from the ruin thereof.

Transformed, the holy virgin appeared as a fluidic fire, making her beauty into a thunderbolt.

By her spells she invoked the Scarab, the Lord Kheph-Ra, so the waters were cloven and the illusion of the towers was destroyed.

Then also the Pyramid was builded so that the initiation might be complete.

Aeon: Evocation, Pyromancy. Learn from the past and prepare for the future

Universe: Works of Malediction and Death. Reward for works accomplished. 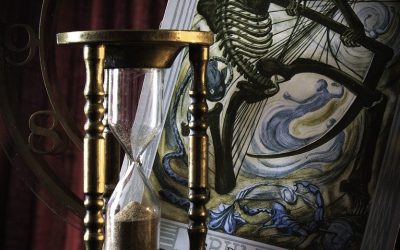 I have been using this tarot invocation and getting great results! Here it is: INVOCATION An Oath Written during the Dawn Meditation Aiwaz! confirm my troth with Thee! my will inspire With secret sperm of subtle, free, creating Fire! Mould Thou my very flesh as Thine,...