The Tarot cards should be laid out in a circle starting at the East place, dealing counter-clockwise. The first place will always be the First House, the second will be the Second House, and so on up to the Twelfth House

The descriptions of the three spreads below assume some knowledge of the astrological rules of House, Sign, planetary rulership, and attributions etc.

Beginners Spreads seem easier if there is only one card in each House, but one obvious problem is that it is quite possible to have no Planetary cards. Without a Planetary card, there are problems in determining which House has significance. One way out of this is to deal out an extra Significator card, which is usually placed in the centre of the circle.

Advanced Spreads use all the 78 cards dealt out in a similar way to the Beginners spread, but without a Significator. Each House will have either six or seven cards. Once the cards are turned over, the top cards will give an overtone for the reading, particularly if some are Planetary cards. The top card in the First House will represent the Ascendant. The House the Significator (if chosen) appears in will receive greater attention, and the Reader should consider which House the corresponding zodiac card is found, where the ruling Planetary card is found, and any aspects it makes to the other planetary cards. At this point the Reader may find it useful to make a diagram showing the Ascendant, the positions of the seven or ten planets, and any particular Significators or Court Cards. Two or more planets in the same house are considered to be in conjunction.

The cards are dealt out into twelve piles in a circle. The first pile will be the current month unless it has already been determined that the spread is starting in January. In order to take advantage of Elemental Dignities, each pile needs to be associated with zodiacal months, which start on about the 21st of each month when the sun enters a new sign.

Each House can be analysed using Elemental Dignities, the Counting Technique and Pairing to create a story, however, the Reader may elect to analyse in detail only the Ascendant and Houses on the question. 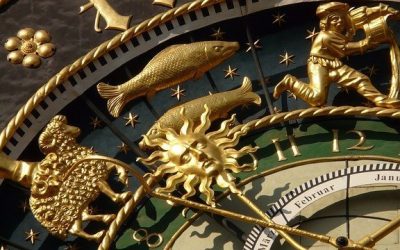