Why do magicians coerce the Goetia?

Making Goetic offerings  is infinitely easier than coercion. Threatening the Goetia with torture and other grisly fates is as unlikely to succeed. When did you ever work well with such a threat? We have all seen the joke office signs, “the beatings will continue until morale improves.”

The fact that a magician even contemplates torture and violence to a spirit is a clear sign that he has no belief in his abilities to work with spirits in the first place. This notion is rooted in the inferiority complexes often seen in magicians, particularly those who big up their powers and inflate their ego to gargantuan size – the “Well-Hard” variety. Fortunately, the spirits are not as stupid as magicians think, and they see through the guise.

What is really funny is that because the magician thinks he has to be so macho that he spends months preparing for a specific ritual, and he will endure endless privations in his quest to impress the spirit – a self-fulfilling prophecy. It’s a bit like a woman telling a man how sexy and strong he is in the vain hope that he can get an erection – the problem would not be there if he was not so insecure. In the case of the hapless magician the spirits project into him the thoughts that he is so powerful – see the size of his wand! He can keep his wand stiff forever! The rituals become ever longer and more complicated as a result.

I have found that the people who contact me desiring to work with the Goetia have in fact already had contact with the Goetia, and it is the Goetia that are directing them to me for advice on how to go ahead.

Goetia have no bodies

The Goetia have no bodies – they don’t need them, and again, when a magician requires that kind of visible manifestation, it is entirely due to a lack of belief in the magician as to the reality of Goetia – as if they did that would be proof. In my experience the only time I saw a spirit as solid and “real” was in my flat – he was standing in the doorway of my kitchen, three feet high – and I was going to top up my drink. When I turned and came back a few seconds later he was gone. No invocation or evocation required for him to appear, and no “license to depart”.

We are conscious beings with a body – our consciousness is infinite, beyond the boundaries. The Goetia are also conscious beings, but without a body. Communication is on the level of consciousness – it is an awareness, an image in our mind of the name or visual characteristic (the descriptions in the grimoires are right on this, the reason being that the Goetia want to differentiate themselves from each other using historical data). They may or may not look that way .

How do you torture or coerce an infinite being? With difficulty. Infinity is infinity – how can an infinite being give to another infinite being? With difficulty. There is a way, and it is similar to how we interact socially, by buying each other a drink. Buying a round creates social cohesion, a feeling of belonging. When a Goetic spirit appears (I am presuming without the magician having gone through the rigmarole of a ritual here), the spirit wants to work with that person, and the spirit will need something of value from the magician. This is where the Goetic offering takes place. Spirits are not interested in money, but they appreciate something of value to the magician, and the simplest is pleasure; alcohol and sex are good examples.

Unless you are an exhibitionist, sex is a private matter, and since the Goetia can appear to you at any moment of the day, even when other people are around, this can make a sex offering problematic. Actually, I am teasing somewhat for the sexual offering is gifting the joy of your orgasm to the spirit.

We can offer the Goetia an offering of the pleasure of the alcoholic drink. Sometimes just the thought of making that offering (without a drink in your hand) seems to work too.

It is better to offer than to receive

Sharing other pleasurable moments – a beautiful sunset, or gazing into your lover’s eyes, can also work, and here is a fundamental key I want to share with you, something that traditional goetic magicians entirely miss. These magicians live in a world of shortage,  by whatever form – stolen – and that they are entitled to take from the Goetia and anyone else, without asking, and they never give back.

Quite simply, partnerships with the Goetia and other spirits requires an energetic offering which creates a subtle bond of mutual attraction and support.

Visitations from the Goetia are more common that you might think. Reasons for this lie in the way we think about them. 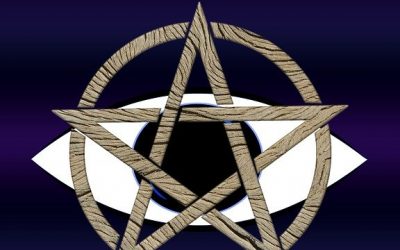