The Three Gunas are one energy appearing in three forms. An object has only two states: either it is stable or it is changing. Since non-change is not a quality of creation, it follows that change is the only alternative. In this case, change will be either evolutionary, or non-evolutionary. Tantra has analysed these states and come up with a system for changing a situation. Favourable situations are enhanced, while bad situations are changed in three fundamental ways known as the three gunas: Sattva Stop or maintain Rajas Change or create Tamas Destroy

Sattva and Tamas are static – they cannot change by themselves, while Rajas provides the energy converting Sattva into Tamas, and vice versa.

There has to be mastery of the situation, be a master of change, or the elements, which already exists through intention or desire. What is done next will depend on the situation, or circumstances or time.

Sometimes a situation can be stopped, but if there is momentum, it may be preferable to change, guide, or channel the action onto something else or transform it into a higher energy.

If the situation cannot be changed, or transformed into something else, it has to be destroyed by increasing the energy level, or creating a boomerang effect. Destruction can happen by creating division or by death.

These actions occur at many levels, which can be switched where necessary. For example, to prevent someone carrying out an action, all that may need to be done is create doubt or worry in the mind. Where several people are working together, division can sown.

Four levels of action in the spiritual realms

Atziluth is pure spirituality. Briah begins the process of separation, which can be considered evil. Yetsirah is the level of formation, where most magic is performed. Those actions manifest in Assiah. There are many levels within these four levels. For example, within Yetsirah there will be the four elements, directions, the mind, the intellect, and emotions. At this level it is possible to change mental poise, create love or hate, heal or cause disease, or even kill.

Within the Tantric tradition mantras are divided into ten karmas or actions. These work on the four elements, which have the following characteristics. Fire Fulfilling desires (but can cause madness, bad name, disrespect, ignorance and nervousness if not suitable). Water Respect, love, satisfaction, knowledge, alertness (activity) Air Excitement, hurriedness, obstacles, destruction, mental worries Earth Stability, patience, inspiration, mental quietness, physical comforts Spirit Love of knowledge, spirituality, opens the mind to receive knowledge, increases intuition, the power of contemplation, and a desire to be alone.

These qualities broadly match the Tarot. Spirit can be seen within a Tarot reading when there is balance between the four elements. The Karmas are:

The ten Karmas are the categories of uses of mantras, not the formulas themselves. These mantras can be used for good and bad. Used for good, the user and benefactor both gain, but doing harm will eventually bring harm to the perpetrator.

There are certain days of the lunar month that are conducive for these mantras.

Powers of the Lunar days

April, September For happiness, peace, prosperity, longevity, and purification of a place

February, March For desires and achievements in worldly and spiritual fields

Note that Lunar days are different from solar days. Each lunar day is for the time the solar/lunar angle to move 12 degrees. Because the speed of the Moon is variable, the length of the Lunar day can vary considerably. 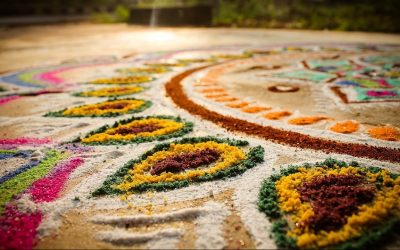 As the engine of the Universe, it is constantly changing within Itself, although it appears to change not. The three gunas are described in Vedic texts, particularly the Bhagavad Gita, and Lord Krishna, the Dark Lord. The fourfold order was created by Me according to...