As the engine of the Universe, it is constantly changing within Itself, although it appears to change not. The three gunas are described in Vedic texts, particularly the Bhagavad Gita, and Lord Krishna, the Dark Lord.

The fourfold order was created by Me according to the division of gunas and actions.

Though I am its author, know Me to be the non-doer, immutable

The entire creation is the interplay of the three gunas. When the primal equilibrium of sattva, rajas and tamas is disturbed, they begin to interact and creation begins. All three must be present in every aspect of creation because, with creation, the process of evolution begins and this needs two forces opposed to each other and one that is complementary to both.

Sattva and tamas are opposed to each other, while rajas is the force complementary to both. Tamas destroys the created state; sattva creates a new state while the first is being destroyed. In this way, through the simultaneous process of creation and destruction, the process of evolution is carried on. The force of rajas plays a necessary but neutral part in creation and destruction; it maintains a bond between the forces of sattva and tamas. Thus all three gunas are necessary for any state of manifested life.

fourfold order’: mathematically, the three gunas may combine with each other in six possible ways. The first Guna is the primary element, and the other is the secondary element.

Maharishi’s commentary on the three gunas emphasise the need for tension between opposing forces vital for creation, which echoes the cardinal rule of Elemental Dignities, namely ‘Fire and Water are enemies’. Inspection of the four combinations of the three gunas suggests a possible correlation between them and the four elements:

Vedic philosophers have been analysing the characteristics of the three gunas and four elements for thousands of years. Below I have summarised two such systems – Vaisheshika and Sankhya, to show the breadth and depth.

The eleven qualities of Atman give an indication of the effect that an object has on the Soul.

Expounded by Kapila, this system of philosophy says that knowledge of an object will not be complete without the knowledge of its components. There are twenty-five categories at the basis of creation and evolution. Purusha Transcendent self, unchanging consciousness Prakriti Nature. The Three Gunas: Sattva, Rajas and Tamas Mahat Cosmic will setting creation into motion. Ahamkara Individuation of Mahat Manas Provides the object for Ahamkara

By now, you must be wondering what on earth this has to do with Tarot, and here is the answer:

This card is attributed to the letter Aleph, which means an Ox, but by its shape the Hebrew letter (so it is said) represents a ploughshare; thus the significance is primarily phallic. It is the first of the the three Mother letters, Aleph, Mem, and Shin, which correspond in various interwoven fashions with all the triads that occur in these cards, notably Fire, Water, Air; Father, Mother, Son; Sulphur, Salt, Mercury; Rajas, Sattvas and Tamas. 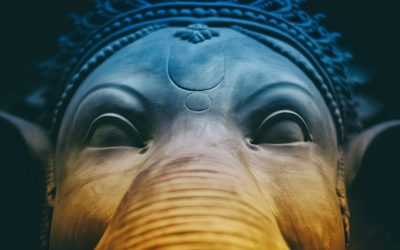 The Three Gunas are one energy appearing in three forms. An object has only two states: either it is stable or it is changing. Since non-change is not a quality of creation, it follows that change is the only alternative. In this case, change will be either...